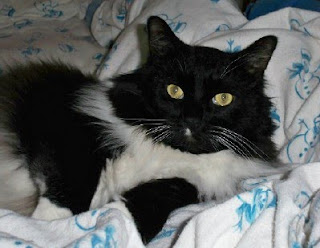 Over the weekend I had to make the difficult decision to have the vet put my cat down.

Here's my favorite picture of him from a few years ago, in his favorite place- bed. When he wasn't in bed, Buddy was the closest thing I ever had to paws-on assistance: holding down pages while I used my mouthstick and laying on my legs during spasms. He tended to show up whenever I was struggling to do something and would inevitably put a paw out to help. If that failed, since he had no opposable thumbs, he would snuggle me.

When he was a kitten, his tail was so big that he constantly tripped over it and would sit on the floor and sigh. I assured him he would grow into it, which he sure did! Buddy weighed 25 pounds and was close to four feet long. Despite that, he was one of the most gentle animals you'd ever meet.

Rest in peace, my dear companion.
Posted by Ruth

Email ThisBlogThis!Share to TwitterShare to FacebookShare to Pinterest
Labels: cats

Your readers need to know that Buddy was fully capable of slamming a big fluffy mitt on the phone's "talk" button if he didn't like what he was hearing -- I won't name names.

He would also snuggle the phone if he recognized the voice- until I prompted the person to say Hi Buddy! When he heard your voice, he also put his big fluffy paws around the entire speakerphone, although I never was able to get a picture of that...

thanks so much Greg. I know you guys understand and it helps.

thanks so much, Katja :)

Ohhhh, Ruth! (little behind on internetz). I remember buddy's debut on the internet, his early blogging experiences, and the stories of the joy he added in your life.

WCD,
Have been following your performance schedule so I know how busy you've been - congratulations on a successful show :)

Thank you for your kind words. He was a joy to have as a companion.

Aw, what a great cat! I'm sorry for your loss.

thanks so much, appreciate it.