Come to the Table : A Passover Seder for Parish Use 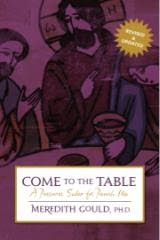 The second edition of Come to the Table: A Passover Seder for Parish Use by Meredith Gould is now available. The book has been used for the past five years by Catholic parishes and has now been revised for a larger audience.


* Historical and Biblical details about Passover with citations to scripture.
* The meaning of Passover symbols and their significance relative to Eucharist/Holy Communion.
* A traditional seder liturgy adapted for Christian use.
* Hebrew prayers in English.
* Easy-to-follow instructions for preparing the Passover meal and conducting a seder for small and large groups.

Meredith Gould writes about why she wrote the second edition over at dotMagis :

More important, my ongoing formation has sparked a deeper yearning to reach out to Christians beyond my Roman Catholic sisters and brothers, something I do in part by serving as abbess of @virtual_abbey. As a result, the second edition has been revised for easy use by any liturgical church whose Holy Week observances would be enhanced by a seder.

For Jews, Passover is a holiday commemorating liberation from bondage as well as God’s faithfulness. My hope is that the new edition of Come to the Table deepens users’ appreciation of Judaism and serves as a reminder that Jesus invited everyone to the table. Thanks be to God.

The book is available at CreateSpace (discount for five or more copies if ordered through there), Amazon (where it's bundled with two other titles by Meredith Gould The Catholic Home and Why Is There a Menorah on the Altar?) and will be available in a Kindle edition soon.
Posted by Ruth