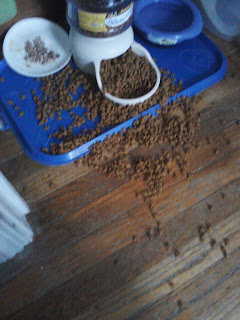 Sometimes I watch my kitten eat his dry food. It's not his favorite thing. He prefers wet food. So he scoops up the kitten chow with a paw, surveys it and eats some. Then the next time he scoops up more and chucks it over his shoulder.

This leaves an ever-growing pile of dry food near his bowl. He hasnt figured out yet that I cant clean it up so he keeps doing it. The pile becomes so large and widespread that he has to walk around it to get at his wet food. At times the dry food gets into his wet food, spilling over onto the paper plate.

I attempt to,pick some up or push it around with a quad reacher until someone comes over to help. Meanwhile the kitten continues to toss the dry food around not quite making the connection that he's creating the mess that interferes with enjoying his wet food. It gets under the wheels of my chair too

Not everyone who comes over will clean up the kittens mess. Some folks forget. Others think he'll stop doing it if he gets uncomfortable enough. So the pile can get really high while we debate whether the kitten knows what he's doing.

This isn't a post about government waste and spending. It really is about a kitten who prefers wet food. But maybe there's a message in there about learning good stewardship of resources at our disposal as we grow up and teaching that to our kids They can't count on and shouldn't always expect someone else to clean up a mess they created.

On the other hand common sense dictates that a kitten and a quadriplegic aren't going to be able to clean it up either. A refusal to help until the situation gets so uncomfortable that it's supposed to teach a lesson isn't exactly useful in that kind of scenario.

It can be difficult to separate out a real crunch time from a self made mess. Sometimes humility is called for, to discern when a simple act of service would help.

One can pray about these things while sweeping.

I think I have reached a certain age, because I am really enjoying the pet blogging here and at other quality blogs (usually not about pets).

And being me, my immediate thought is: I bet there's an invention for this. Maybe a Clever Cat food box counterpart to the Clever Cat litter box.

My experience: My cat does not believe in leftovers. She believes in freshly poured food; anything still in the bowl after her first bites must transform itself into gravel or something. I have to come and re-pour the same exact food from her bowl back into her bowl. And then she's like, "Oh! That was food! I had forgotten!"

But yes, on topic, how hard is it sweep up after the cat, helper people?? Granted no other member of my family knows how to do so. Maybe it is a rarer talent than we thought.

Jennifer,
I would love an invention like that! I'm now seeing how my kitten does the same thing with "leftovers" LOL too funny :)

Oh wow, cats... I'm not sure if they are vindictive, cheeky, oblivious or evil. Still, I love them!

I was thinking about this. Could you just set the whole feeding area into a big box? Maybe a plastic storage bin of some kind? The recycling bins we are issued around here seem like they'd be about the right dimensions. You want the sides very tall, because a cat can totally kick stuff higher than the walls of a say a dishpan or something.

(And off topic, but I was realizing about cats -- they'd be happy to eat at table-level (or any height). If it helps you any with cat-tending to have the food dispensing area up more at your height and not on the floor. That was just a random realization, not directly related.)

Jen,
That's a good idea about the recycling bin. Will check that out thanks .I have been feeding him at various heights which he actually likes!